I tried to make seed, selfing lubbersii, on a good number of occasions, without success. I could tell that the male flowers just weren't releasing pollen. This is fairly common, I find, under high humidity conditions.

Happily, as many of you know, drying a mature male flower (not one just opened), allows release of pollen. After letting male flowers sit on the glass lid of the terrarium for a week, they released clouds of pollen. Today's seed pod, perhaps six weeks later, after drying for a few days, yielded almost 100% good seed, based on visual inspection.

Now I can cut that plant and start cuttings. I find that lubbersii, if not cut back once a year or so, ends up with a pretty head, but skinny bare legs, and knobby knees. I leave only a couple of nodes when cutting back.

Cuttings root readily. I have even done it in water.

I should add that lubbersii doesn't really need terrarium conditions. But it's easy to grow there, and prettier for me. 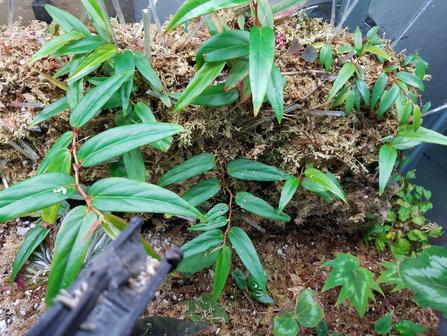 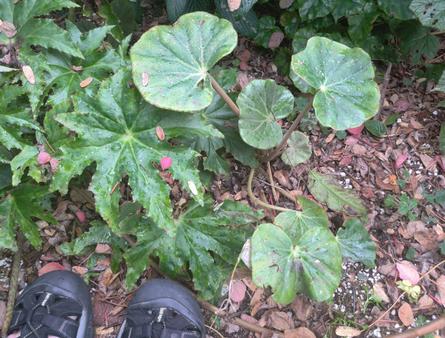 If any doubt the merit of B. egregia, let them remember that, by its name, it is Excellent. Latin, egregia, being the feminine singular of egregius, meaning one that stands out, I.e., excellent. The root of the Latin egregius, being "from ē- ‎(“out of, outside of”) +‎ grex ‎(“herd”) +‎ -ius, "outside of the herd", from Wiktionary.org. I love that kind of stuff.

B. egregia, native to eastern Brazil, is also quite singular in that it is the only member of section Tetrachia. It bears minutely bullate (puckered or blistered in appearance) leaves. My mnemonic, my meaning reminder, for bullate is bullet. Its conical tip is bullate. Bullets took their name from Latin bulla, bubble, when bullets were round.

One distinguishing trait of egregia is that it may have both peltate (back attaching) and non-peltate (side attaching) leaves on the same plants. I can recall another thick stemmed species, from westerm Brazil and thereabouts, whose individual plants may also bear lovely leaves of both types: B. wollnyi.

B. egregia is an easy grow species, demanding lower humidity than many species. It is not harmed by temperatures down to the mid-thirties, and may tolerate a light frost. A well draining medium is called for, excellent drainage. Potted specimens need larger that usual containers, with clay pots being ideal.

Readily grown from cuttings and seed, egregia should begin blooming during its second year, soon attaining 3 to 4 feet in height under optimal conditions.

Begonia herbacea blooming.  There exists great confusion regarding the identification of herbacea and lanceolata. This is herbacea, as I understand it, thanks principally to the scholarship of Mark Tebbitt, whom many of you know.

Mark Tebbitt explains why what most of have learned, about which is what, was wrong, in his BEGONIAS: Cultivation, Identification, and Natural History, at pages 147-149. (The preceeding language is exclusively my own.)

Tebbitt explains, in part, that "the short descriptions that accompany the original type [species] illustrations inform us that the species with elliptic leaves and sometimes-scalloped margins should be named B. lanceolata, and the plant with oblanceolate leaf blades and entire margins should be called B. herbacea. Unfortunately, just the opposite is how these species are currently recognized in most horticultural works. The former species was named lanceolata (rather than elliptica) because when it was described, the word lanceolate referred to the shape that we now call elliptic." Page 148.  If you do not yet own Mark Tebbitt's book, I highly recommend it. I bought my copy from Amazon.com

Presently all my herbacea, in at least three different terrariums, are blooming, having begun their blooms at the same time. My more mature lanceolata have also begun blooming, as have a few other species, including rostrata. As an ensemble, these new bloomers began, almost simultaniously, and most fortuitously, forming flowers. I think I know why.

The T5 lights in the terrarium room, above each tank, have been running from 8:00 in the morning until 8:00 pm for several months. But, the room was never very dark because of constant light streaming out of my propagation area. With the addition of a double thickness of blackout curtains, for the last few weeks my terrariums have had twelve hours of near total darkness each night. I think this change triggered the new blooms.

As I presently have so many young plants in terrariums, I have hesitated to further reduce the total daily hours of illumination in the terrarium room. Also, I can save money by having terrarium "winter" during warm summer months. And that is my plan. 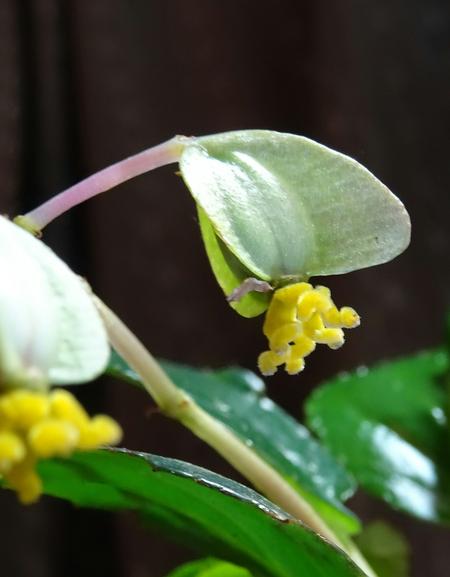 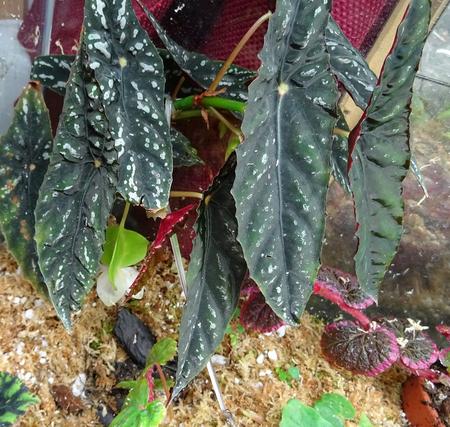 B. petasitifolia, Section Pritzelia, is native to Brazil (Bahia). The species name comes from someone being clever.

My seed grown plant is about one year old. It appears rather succulent. I suspect this species is dry season adapted.

Petisitifolia does not enjoy persistently wet leaves. But has, nevertheless, continued growth throughout this wettest of West Hollywood winters. I look forward to a summer bloom, as such is its nature.

To the left is a bit of a weed, B. heracleifolia. 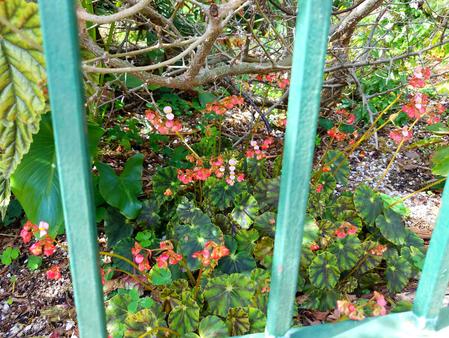 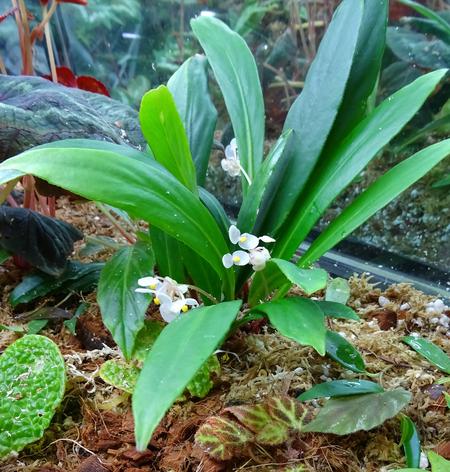 B. komoensis is easy grow (terrarium) African epiphyte. (I apologize for the ugly fan obscuring part of the image.) B. komoensis lacks B. polygonoides' succulent leaves, and wilts at humidity levels polygonoides enjoys.

I suspect komoensis would also do well in a warm greenhouse. By warm, I mean one that maintains a temperature above 50° F, 10° C, as many (most?) African species, including polygonoides, suffer fatal injury at lower temperatures. I would very much appreciate any information regarding contrary examples of more cold tolerant African species.

I recently observed with dismay komoensis sold on EBay for extremely high prices, today for $103. This price does not reflect its difficultly in cultivation, or propagation. And it limits access to a species that should be more widely grown. I find that "supply side economics" is not promoting the ideals and aspirations of the American Begonia Society in this instance.

As with most scandent/trailing epiphytes, komoensis roots readily when laid on top of the growing medium in a terrarium.

The mount shown in the image above has a tree fern backing (which is a bad thing, not environmentally sustainable, etc.), previously used by me, sterilized and reused (good things), with a fairly thin top later of long fiber New Zealand Sphagnum moss.

Initially, the Sphagnum and plants are held in place by fishing line and plastic cocktail skewers, source material for endless terrarium tools.(They can be joined and bent with heat.) Soon, root growth secures the Sphagnum moss. I then remove the skewers and fishing line for reasons of aesthetics, and so the fishing line never cuts into a plant. Looking at this photo, I need to go do some of that right now!

I make and share flower photos because I sometimes find them helpful in establishing a species identification. And also because I find them quite beautiful.

B. guadensis is one of the species collected by Jacky Duruisseau during his 2014 Ecuador expedition (Sp. 17). Jacky reported that he found the species growing on slopes.

This is the female flower showing some enlargement since hand pollination.

For the last two or three years, slowly spreading B. mazae f nigricans has thrived in this rather dry corner of the garden, beneath a myrhh tree, genus Commifora. This year's uncommonly wet winter has encouraged a bountifully buxom bloom.

I sometimes forget how to tell apart the various forms and variations of B. mazae. Fortunately, Mark Tebbitt's Begonias book, that invaluable resource (which all of us should own IMHO), provides a key:

The seeds I ordered from Germany, a year or two ago, well labelled B. mazae f nigricans. This seems correct.

My plant receives some morning sun. Under lower light, this form can bear quite darkly attractive leaves.